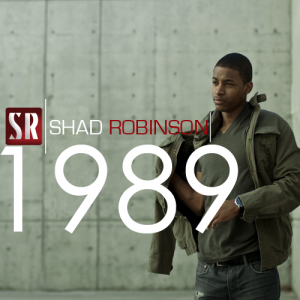 I’ve been neglecting my actual writing lately for a lot of reasons. Real life stuff happening outside the Internet and my work blogging about the latest and greatest in California’s rap scene for WestCoastRydaz.com (WCR) usually keep me very busy, not to mention all the time I spend hitting different blocks in LA in pursuit of my quest for the best food in the city.

With so much to do, finding the free time to just sit down and write about stuff I love didn’t seem very likely – until today.

Covering music like I do with WCR means I get a ton of e-mail music submissions and it’s not always easy to sift between the different skill levels stuffing my inbox (pause), so I didn’t really know what I would be getting when I saw a new e-mail about an artist named Shad Robinson. I recognized the name of the sender (Fredo Tovar) as a well-known and talented music director outta Cali with his APlusFilmz company so I knew it wouldn’t be something amateur.

After opening the e-mail I saw it included a link to the video for Shad’s single “Cardboard” and links to download his “1989” album for free and purchase it on iTunes, as well as for his website and social networking information. All that sweetened the deal for me, since a lot of e-mails I get are just random unnamed songs with no photos or information attached.

As I prepared to get some work done I opened up his bandcamp page to listen to the album in the background. I’ve done this before with other submissions and it usually just plays the back while I work, but this time was different. Within a few minutes the song “1989” caught my attention, its raw lyrics and passionate emotion speaking directly to me from my speakers.

I had to stop every thing I was doing and hit the rewind button on the song.

As the song started again from the beginning, it was clear this wasn’t just another random artist. The emotions behind his words were especially powerful and stood out to me, which is saying a lot for lyrics as strong as the ones on the track and the topic itself – a woman struggling with abuse, drugs and abandonment during pregnancy. Here’s a preview of the lyrics on the song:

“Syringe needle, arm wrapped with a tourniquet/
Coke in the spoon she got the heat, she about to burn the shit/
In the corner of an empty room, ain’t even furnished yet/
This the type of pain you can’t relieve with no Percocets/
She’s out her mind, happiness she’s tryin to search for it/
All to find it in 30 minutes worth of perfectness . . .
Addicted to the blurriness, not worried about no birth defects/
Middle finger to the womb like ‘fuck you son’
The other to the sky like oh God ‘fuck the sun.'”

The song gives the impression that it’s a tale of the personal experience his mother went through, but even if it’s not it’s a testament to his ability as a songwriter and artist that he was able to share such a powerful message. For someone like me, it was a refreshing reminder of the things that made me fall in love with music in the first place; an artist’s gift to touch the lives of his listeners and those going through similar issues through his own words and a microphone.

The rest of the album solidifies that talent, as he showcases it further on songs like “Dear Sarah” and “Don’t Fade Away.” It has a crisp sound, sticks to a theme and most importantly, it shows that he respects music as an art. The production, music videos and overall product are all on point, earning him a new fan in me and hopefully opening a path for him to continue to make music the way he does. I’ll leave you with this quote of his, off the song “Thank You’s and Fuck You’s” where he asks;

“It’s more than music when I put my soul on it/One question I ask is ‘will they notice this?'”

The answer is yes, people are noticing.